Last month we published the Nimiq 2.0 Supply Curve Considerations, provided tools to analyze it more easily, discussed it with the Nimiq community and hosted an AMA. Now we want to share with you the next steps in this sensitive process.

How did we get here?

A fundamental aspect of a cryptocurrency is the emission rate of the coin. This is the amount of rewards that participants, be it miners or stakers, receive for supporting the network and validating transactions. During the last year, we noticed increasing requests to consider changing this rate. Changing the rate is serious business since it is potentially related to a lot of different factors like the security of the network, perception of the project to newcomers, incentives for new participants and possible price developments from increasing scarcity.

A change in the supply curve clearly impacts the entire Nimiq Ecosystem. This decision has to be taken together. We felt responsible for providing a starting point for this discussion. Thus, we worked with an economic modeling advisor (former Morgan Stanley Smith Barney, now a director at Gemini Finance) who works in asset valuation and advised us in creating the assumptions and restrictions, reducing complexity and identifying reasonable boundaries. The advisor’s suggestions were used as inspiration to write the Nimiq 2.0 Supply Curve Considerations and kickstart these discussions.

The Nimiq Community got actively involved and even created tools to analyze and discuss potential supply curves. We also provided a spreadsheet for users to play around and find out what each curve means for them in the short-, medium- and long-run. Discussions were held in a thread of the Nimiq Forum. Soon, we felt the need to have an active discussion to give feedback, so we held an AMA with the team members most knowledgeable regarding this topic to answer all questions of the community.

Based on those discussions and a casual poll we ran in our Twitter account, it is clear that various opinions exist in the community. The poll shows that 63%, the majority, appear in favor of a change, 17% are against it (leaving 20% undecided). For a solid decision process we realized that a formal voting process, that involves the community whilst protecting the project from stalling to a dead end, is necessary. Inspired by community suggestions, we believe we have designed a voting process that allows users to make their voices heard in a fair and transparent way.

Before we go on, let’s get some concepts down.

One of the most fundamental parameters: the emission - also sometimes referred to as “inflation” - is the number of coins that get added to the supply per time unit. Of course, the higher the emission in the beginning, the lower it has to be towards reaching the emission cap.

As prices are built by supply and demand, a higher supply usually means a lower price. So, when looking at the rewards, one should also take the dilution (“inflation”) into account which may affect the price of the coins already in existence.

An interesting aspect to consider is the stock-to-flow ratio ("S/F"). It is the ratio between the current supply and the newly added supply per year. Or, in other words, the number of years it would take to reach the current supply from zero, given the current emission rate. Gold has a S/F ratio of 62, Bitcoin currently of 27.5 and after the upcoming halvening it will be 55. As a higher value relates to less supply being added compared to the stock being available, it is a good measure for scarcity. The current supply curve has a ratio of 3.7.

After considering the results from the Twitter Poll and the suggestions from the community in the discussion threads, we came to the following conclusion regarding the voting process:

Based on these we came up with this process:

How will voting work? 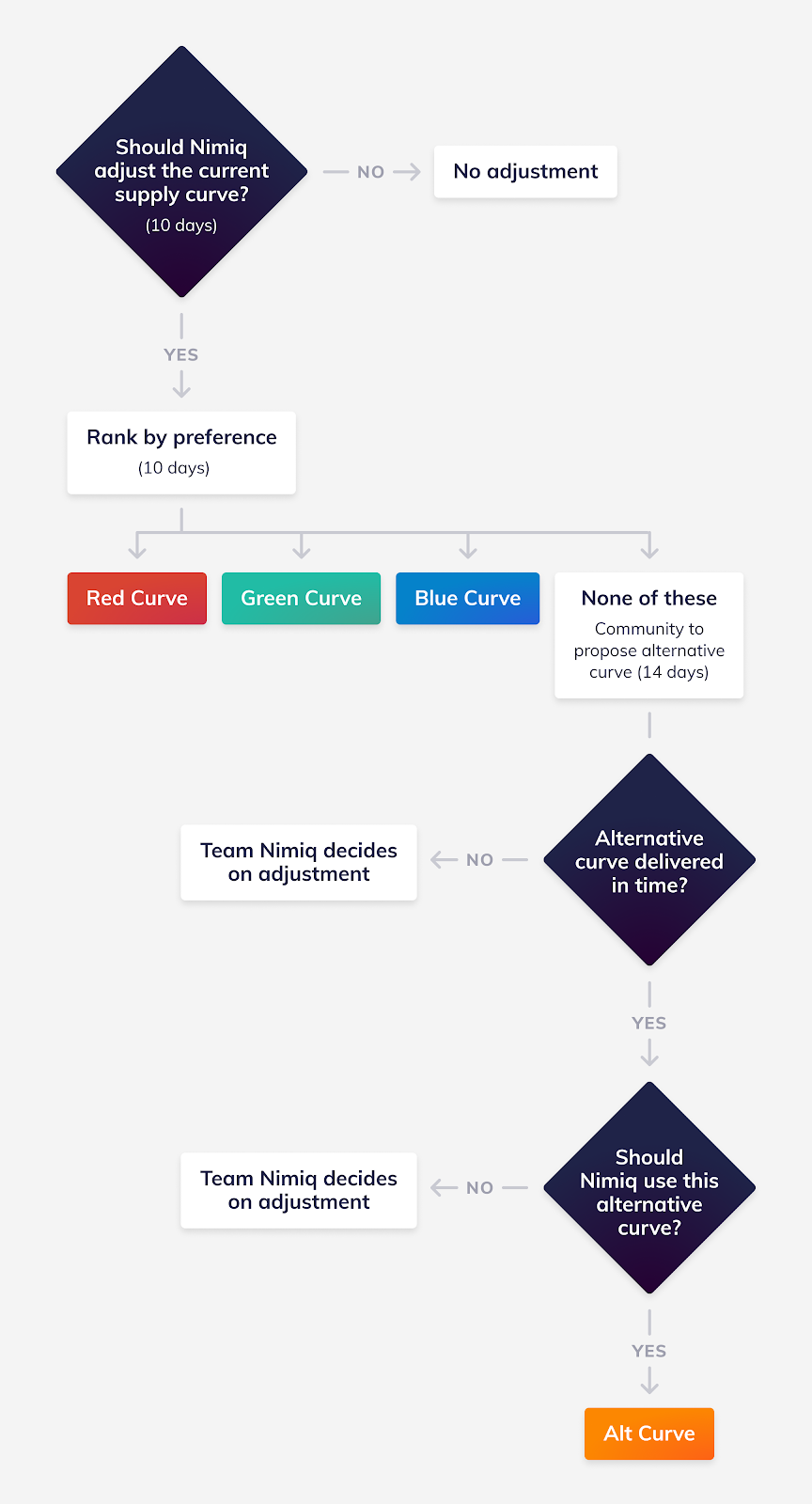 We will use the new Nimiq Voting App that we are building right now [UPDATE: the app is deployed. see Voting Procedure Blog for current timeline and voting instructions]. The first vote will determine if the curve will change and thus if there is a second round. The second round is about the specific type of curve that the project should then proceed with. Three options are provided which are explained below. Another option provided is “None of the suggested curves.” If this option wins, it then would require the community to organize and step forward to provide an alternative curve option which would then be voted upon. If such an alternative is not presented within 14 days or following an additional voting round is rejected, the responsibility to make the decision will fall back on Team Nimiq, thus prohibiting this process from entering an endless cycle. As stated above, the NIM held by Nimiq Foundation as well as the ImpactX Foundation will not participate in any of the voting.

First of all, describing supply curves is complicated. If you want to dive down into the numbers, please read the specific blogpost, this thread in the forum, check out this video explaining the supply curve considerations and sheet and finally try tweaking the numbers yourself in the spreadsheet.

From discussions within the team and together with the community, three supply curves have manifested as good candidates to replace the current supply curve. Let’s have a closer look. 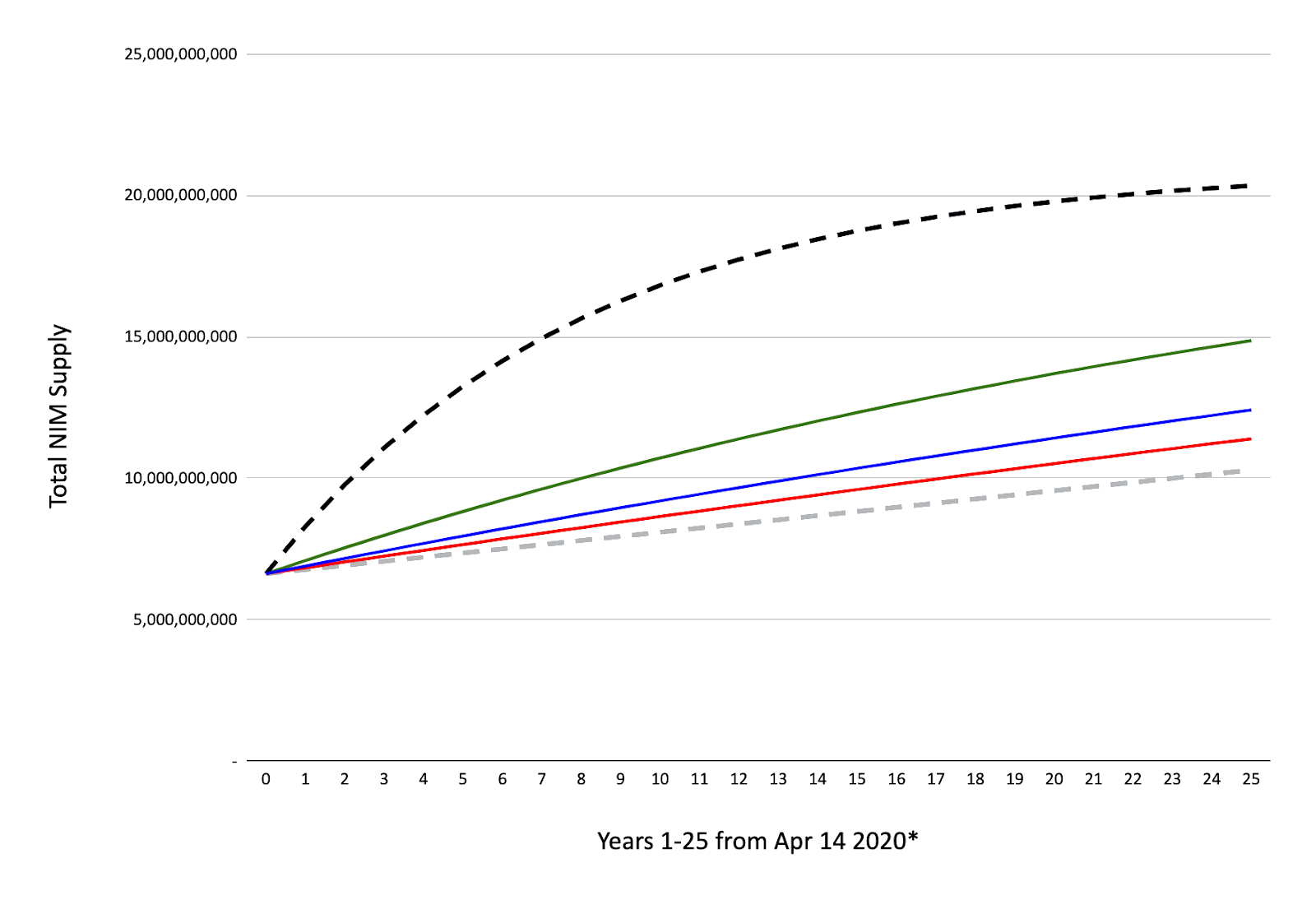 Disclaimer: We are doing this in an attempt to help users understand more about the curves, this should not be considered financial advice or the team vouching for a specific curve. For purposes of this discussion, the models assume a switch to Proof-of-Stake (and with it any potential new supply curve) on April 14 2020. This is not an actual timeline and all numbers are approximations and subject to implementation adjustments.

To set the stage for comparison, here the overview for the current supply curve. It has a high emission/reward rate currently around 3’445 NIM per minute which equates to the much debated 28% annual coin supply growth (“inflation”), the main reason for this voting altogether. This emission/reward decreases by -12.04% per year. The current stock-to-flow ratio stands around 3.7 which can be considered very low compared to Gold (62) and BTC (27.5). Here the overview of estimates in time (from switch to PoS) for the coin supply, inflation percentage, staking return percentage and reward per minute: 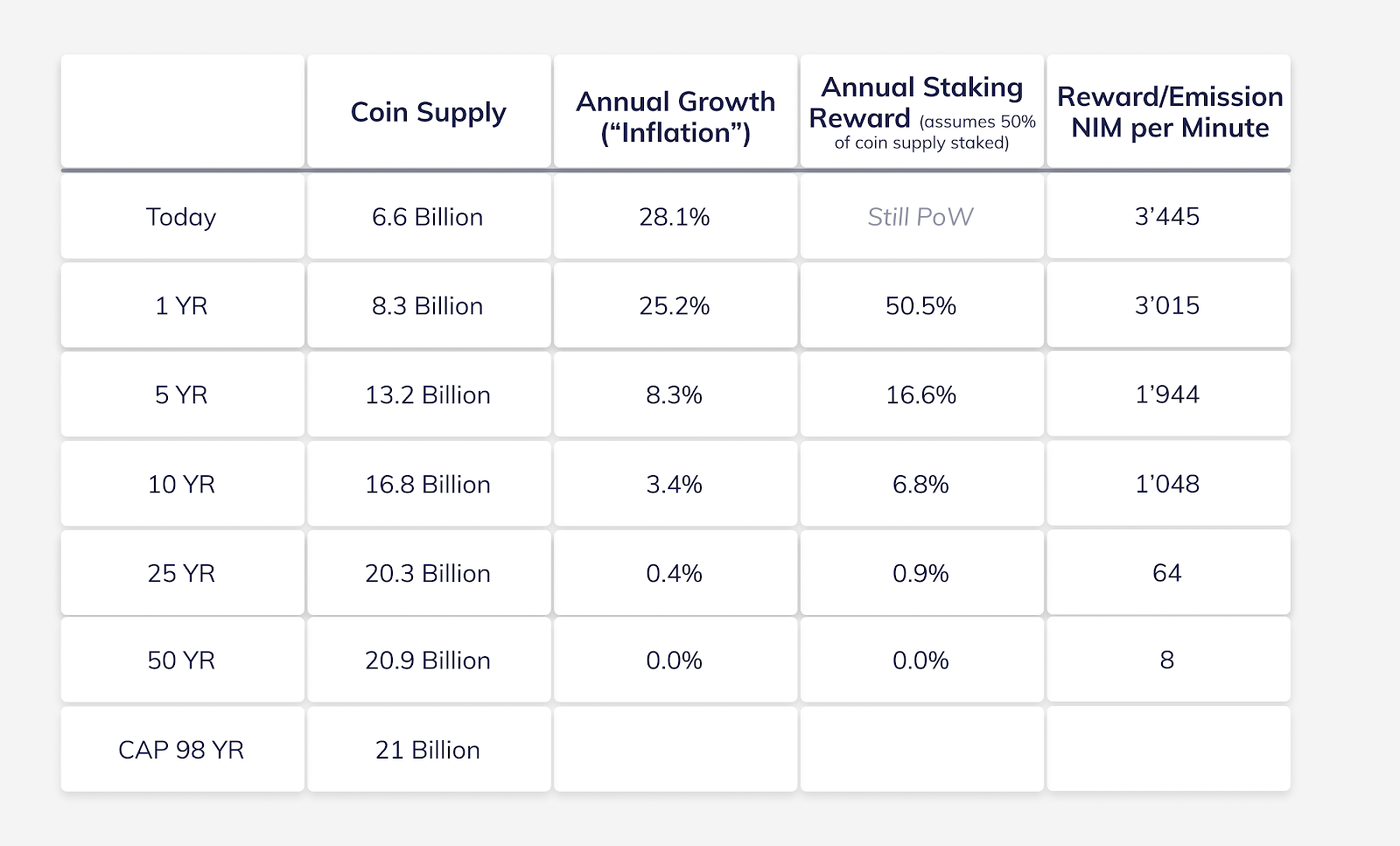 More coins emitted in the beginning means more rewards but also less initial scarcity as well as lower rewards at later stages. While less than the CURRENT supply curve, this one has the highest initial emission rate of all three suggestions. This curve starts at 900 NIM per minute which equates to a first year coin supply growth (inflation) of just over 7%. This emission/reward decreases by -3.15% per year. The initial stock-to-flow ratio stands around 14. Here the overview of estimates in time (from switch to PoS) for the coin supply, inflation percentage, staking return percentage and reward per minute: 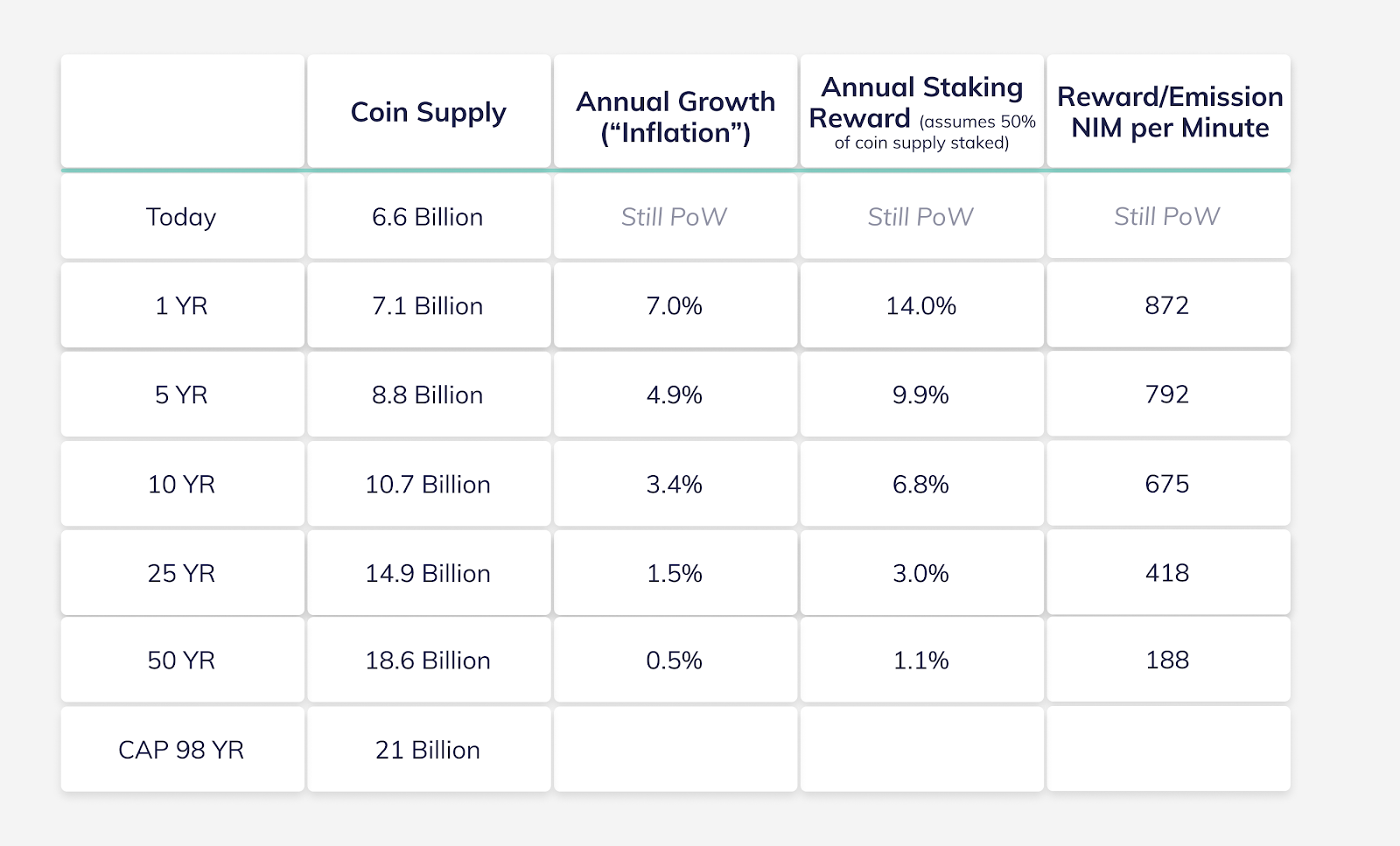 Less coins emitted in the beginning means more initial scarcity while maintaining a relatively higher reward at later stages. It comes with an initial stock-to-flow ratio of 32 (slightly above BTC). This curve has the lowest initial emission rate of all three suggestions. It starts at 400 NIM per minute which equates to a first year coin supply growth (inflation) of just over 3%. The emission/reward rate of this curve is the most stable of all three suggestions as it decreases by only -0.79% per year. Here the overview of estimates in time (from switch to PoS) for the coin supply, inflation percentage, staking return percentage and reward per minute: 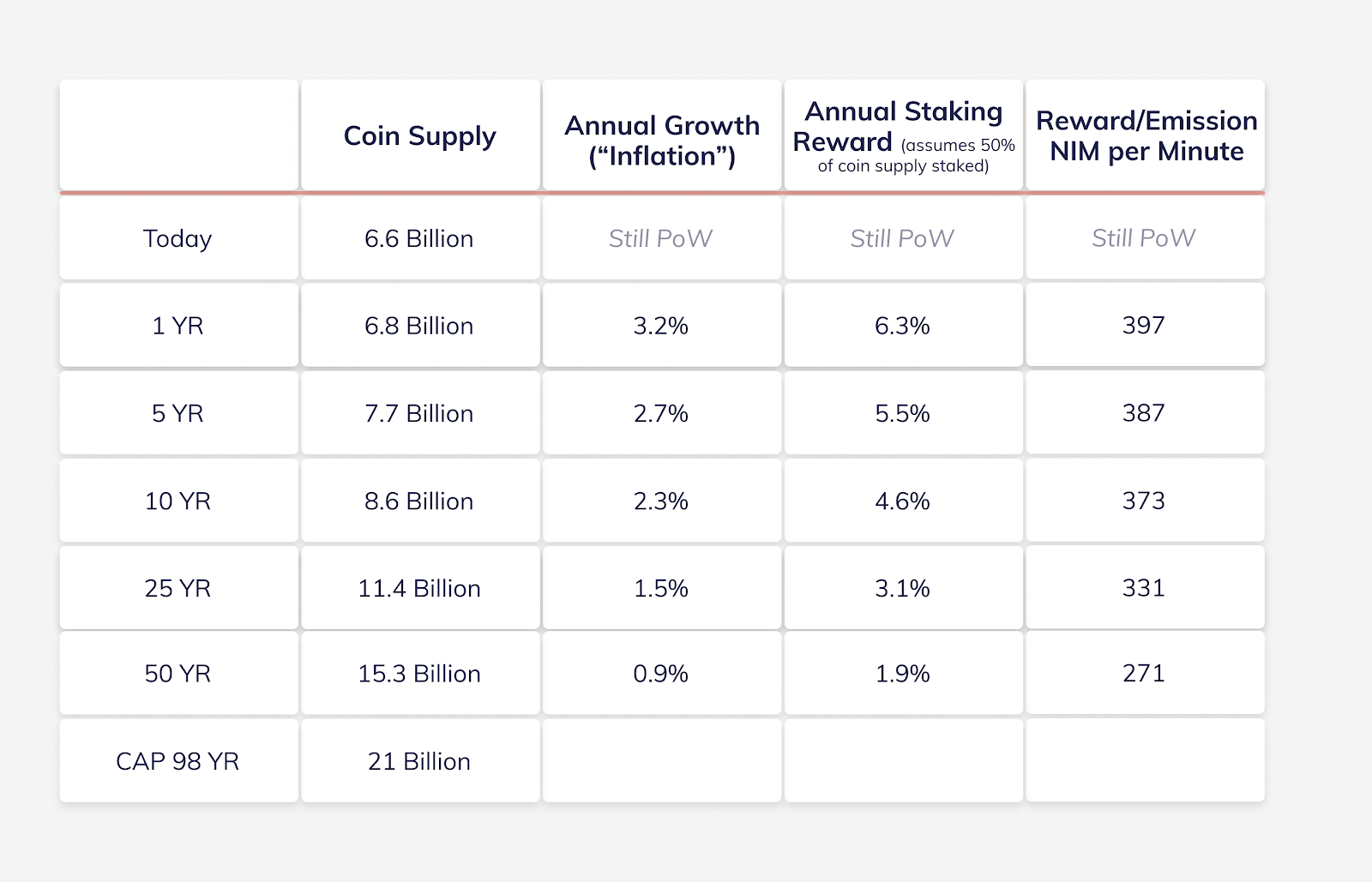 BLUE Curve: The balanced one

[UPDATE: Blue is winner of NIM supply curve for Nimiq 2.0!]

This community suggestion is a balance between high and low, GREEN and RED, with the idea to optimize between initial scarcity and reward amounts over time. It’s initial stock-to-flow ratio is 24. It has an initial emission rate of 525 NIM per minute which equates to a first year coin supply growth (inflation) of just over 4%. The emission/reward rate of this curve is reasonably as it decreases by -1.47% per year. Here the overview of estimates in time (from switch to PoS) for the coin supply, inflation percentage, staking return percentage and reward per minute: 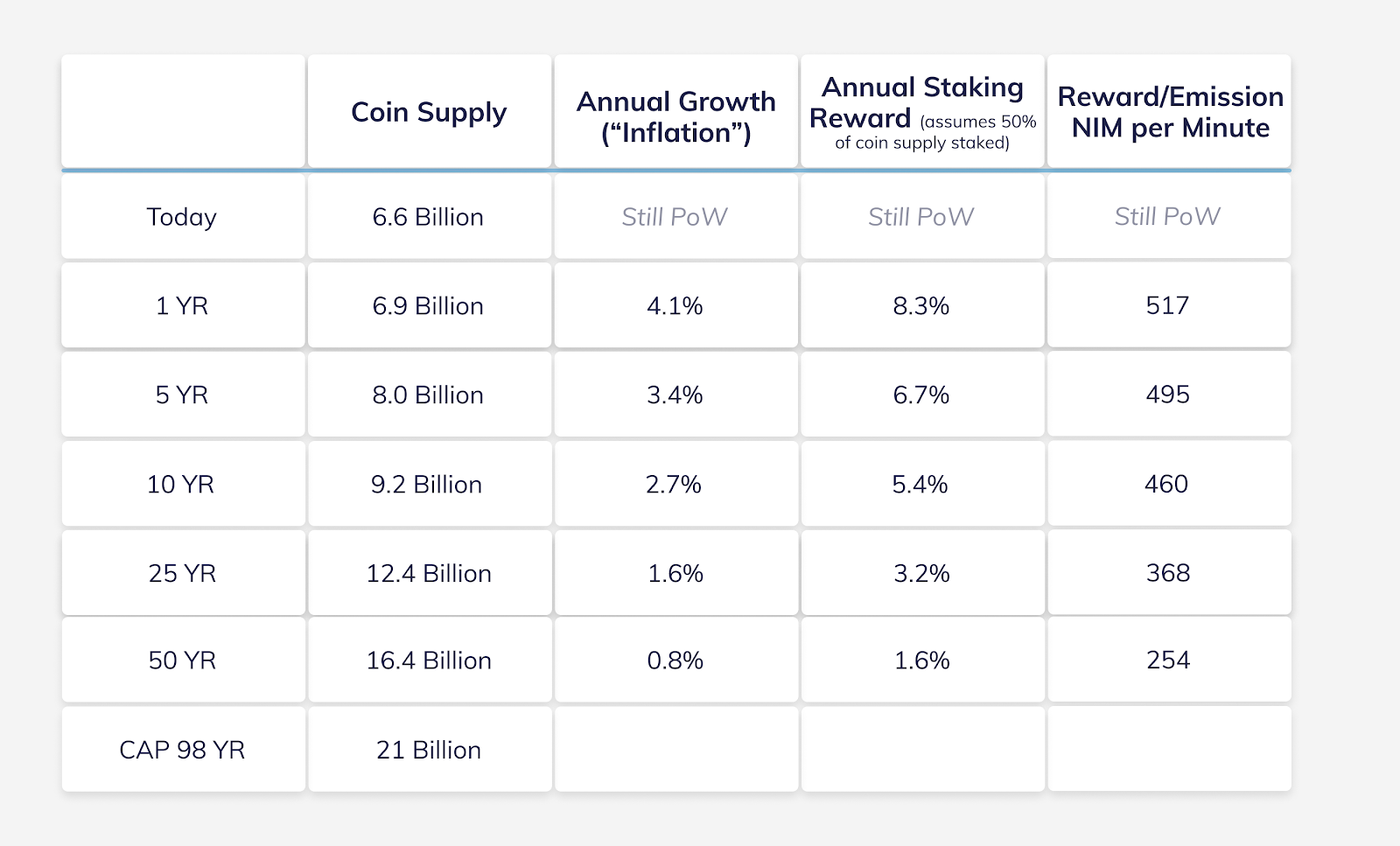 What to keep in mind

We are finishing fine tuning the voting app right now . Next, we would like to try it out with a test voting round with active community members just to make sure everything is working as expected. We hope to be ready for that by the end of the week. Start making up your mind, get your NIM ready to vote and stay tuned to Nimiq’s Twitter Account where we will announce the voting once everything is ready.

We would like to thank all the active community members who participated in the discussions, especially Rob and Big Mac who got particularly involved. We truly appreciate you all! :*

Removing plastic waste from the Oceans: Why local efforts matter and what the cryptocurrency space can do to help

Plastic waste is a major source of pollution. Can crypto become part of the solution to help clean our oceans?

Nimiq is one of the founding members of The .Wallet Alliance - a group of leading wallets who are setting a new standard username for peer-to-peer crypto transfers using Unstoppable Domains’s .wallet NFT Domains