As you all already know, Nimiq 1.0 is going to transition to Nimiq 2.0 in the near future. With this major update the Nimiq blockchain will move from Proof-of-Work to Proof-of-Stake with a new, high-performance consensus algorithm as well as the new, recently elected NIM supply curve.

The switch to Nimiq 2.0 will happen through a “hard fork” and in this blog post we will share our plans for the entire process leading up to and including the hard fork. 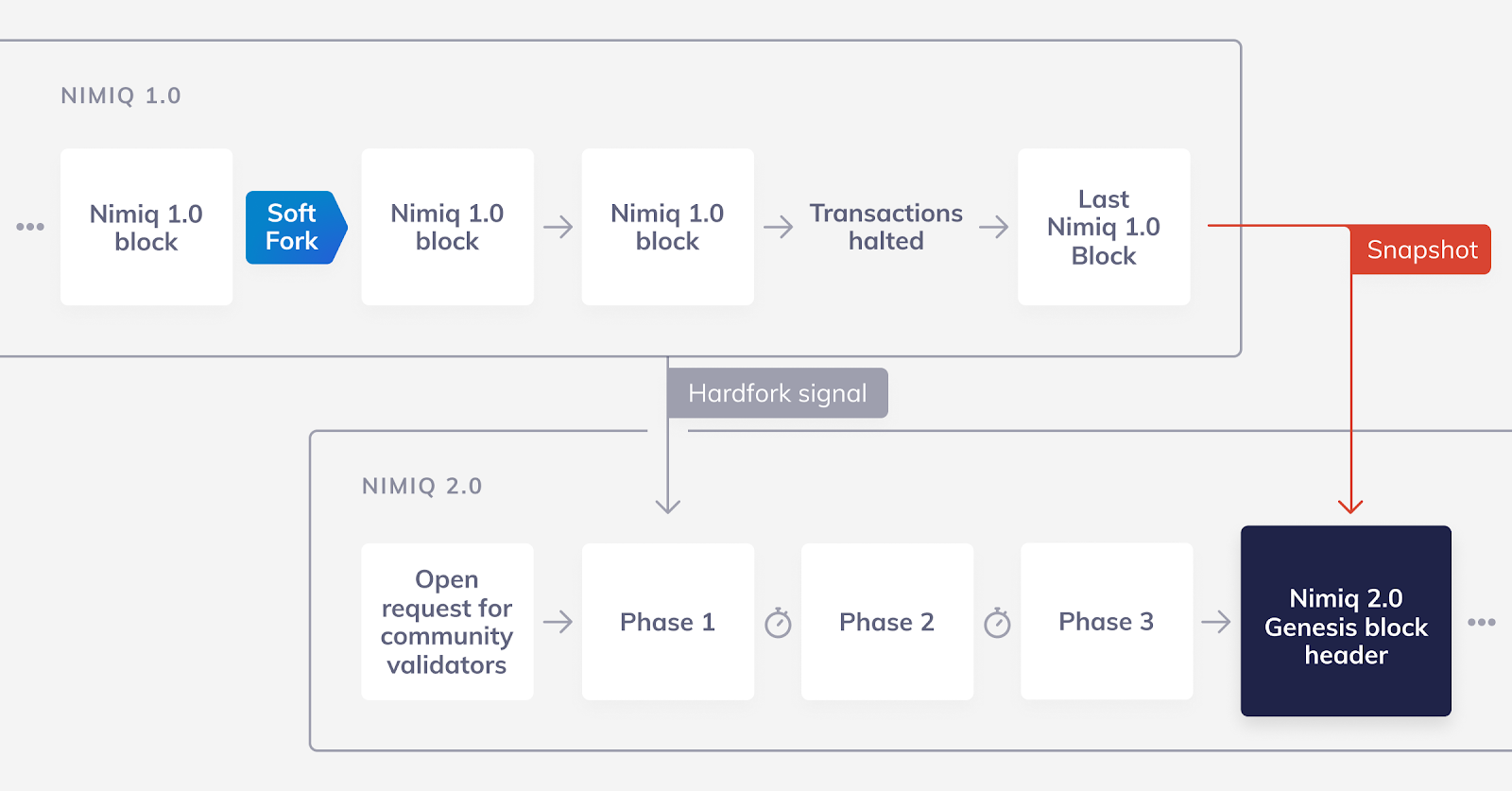 We can estimate the percentage of the hashpower that installed the new version by, for example, seeing how many of the last 1000 blocks have the signal. When that percentage reaches a predetermined threshold, the fork is activated. This must not be interpreted as a vote by the miners as the decision to switch to Nimiq 2.0 was already made by the overwhelming majority of the community. Instead, miners are simply signalling their readiness for the soft fork.

After the soft fork is activated, nothing will change initially, the blockchain will continue as normal. The main difference is the miners will now be able to receive a signal from Team Nimiq and when that signal happens all miners that installed the new client will stop mining — more details on this follow in the next sections.

Of course we can’t force every miner to install the new client and the miners that do not install it will continue to produce blocks even after everyone else stopped. Until the hard fork date, we will not know if anyone will bother to continue and support the old protocol. But with the community, the team and the exchanges committed to upgrading to Nimiq 2.0, we can be certain that there is no reasonable incentive to pursue the expired blockchain..

For some time, between the introduction of the soft fork on Nimiq 1.0 and the hard fork date, any NIM holder will be able to signal their intention to become the first validators on the Nimiq 2.0 blockchain. This will be very similar to how the supply curve voting occurred, by sending a simple transaction of 1 Luna (0.00001 NIM) to a predetermined address.

But anyone that wishes to be one of the first validators on Nimiq 2.0 will need to meet some more conditions. Some of these are necessary because of the protocol itself — for example, staking a minimum of 10’000 NIM and submitting the validator public key — while others will be imposed by us to guarantee that all the validators will be online and ready when the Nimiq 2.0 blockchain starts — for example, running a validator node on the Testnet for a long enough time. The exact set of conditions hasn’t been decided yet but will be shared with the community on time.

The fortunate people who are able to pass this screening process will be included in the genesis block and will become the first validators of Nimiq 2.0, thus making history! We want to emphasize that the more centralized and restrictive process only applies to the validators of that very first epoch. Anyone that wants to validate on Nimiq 2.0, but does not wish to go through this process, can simply wait for Nimiq 2.0 to start and stake their funds then. The validators from the second epoch forward will be chosen entirely by the protocol and without any intervention from Team Nimiq whatsoever.

Note: the above mentioned 10’000 NIM applies to stakers that run their own validator only, there will be no predetermined minimum for delegated staking, but a staking pool owner might choose to set one.

After we introduce the soft fork to Nimiq 1.0 and select validators for Nimiq 2.0 we are ready to start the hard fork. The hard fork will happen in three phases.

There will be a signal on the Nimiq 1.0 blockchain. This signal will simply be a transaction sent from an address controlled by Team Nimiq that was hard-coded into the soft fork. When this transaction is mined, a countdown will begin. When the countdown ends, phase two will begin.

upgrades. The length of the countdown isn’t set in stone yet, but will likely be between one and two weeks.

When phase two begins, all transactions will be forbidden. No more transactions of any kind will be allowed (with the exception of the block reward). In effect this will freeze everyone’s funds. Then a second countdown will begin, but this one will be much shorter, somewhere between 20 and 30 minutes.

When the countdown ends, phase three will begin.

Miners will stop producing blocks thereby effectively halting the Nimiq 1.0 blockchain. At the same time, Team Nimiq will take the last block produced and snapshot the state — the one which was already frozen many blocks before. This snapshot will be used, with the help of an automated tool that we will create and open-source beforehand, to create the genesis block for the Nimiq 2.0 blockchain.

The genesis block will then be broadcast to the network and received by the validators who were selected to be the first validators of Nimiq 2.0. These validators will then start producing blocks and Nimiq 2.0 will be born!

Team Nimiq is very excited and working hard towards this goal. Connect on our social channels to get all the latest updates towards Nimiq 2.0!

None of the statements must be viewed as an endorsement or recommendation for Nimiq, any cryptocurrency, or investment product. Neither the information, nor any opinion contained herein constitutes a solicitation or offer by the creators or participants to buy or sell any securities or other financial instruments or provide any investment advice or service. All statements contained in statements made in Nimiq’s web pages, blogs, social media, press releases, or in any place accessible by the public, and oral statements that may be made by Nimiq or project associates that are not statements of historical fact, constitute “forward-looking statements”. These forward-looking statements involve known and unknown risks, uncertainties, and other factors that may cause the actual future results, performance, or achievements to be materially different from any future results, performance, or achievements expected, expressed, or implied by such forward-looking statements.